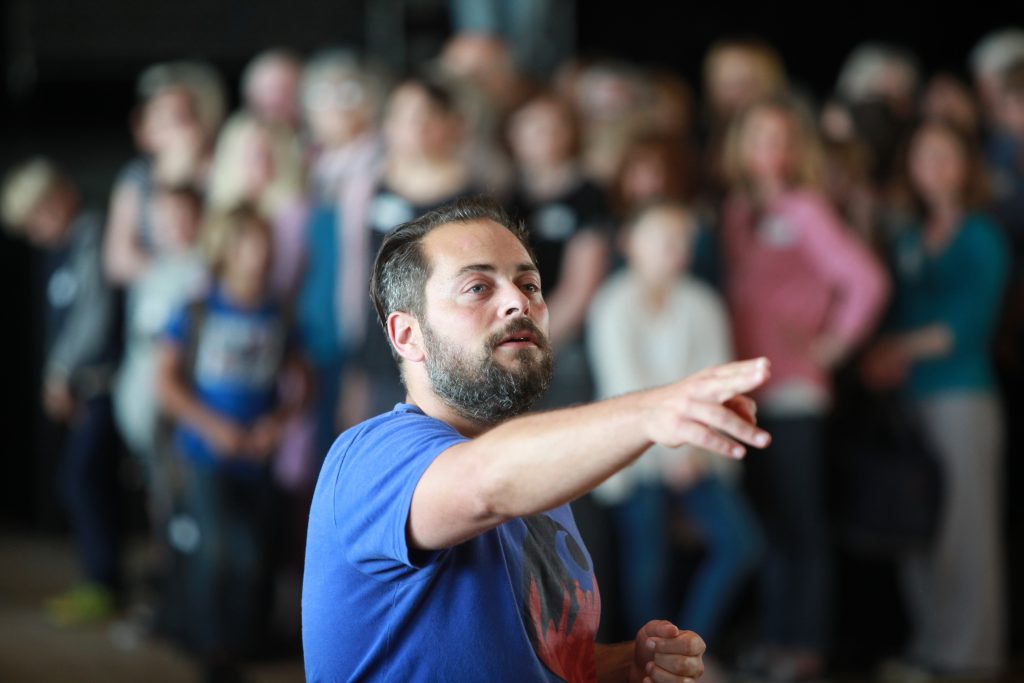 He has recorded for the BBC, Radio Netherlands, Chandos and ECM. As a keyboard player he has done recital tours with numerous international artists. He is principal keyboard player of the English Baroque Soloists and the Orchestra of St John’s and has worked extensively with jazz legend John Surman with whom he has played improvised duo concerts at many of the major international jazz festivals.

A special interest in creative projects which develop young people’s imaginative ideas into dramatic, instrumental and vocal works involves Howard as a composer and animateur for La Folia, Theatre Royal Norwich, Chichester Festival Theatre, The Anvil, Glyndebourne, Scottish Chamber Orchestra and London Symphony Orchestra where he is artistic director of the LSO On Track Next Generations project. For La Folia, Howard is especially committed to finding innovative ways of bringing live music-making of the highest calibre to people who may otherwise not have the opportunity to experience it.

Simon was born and educated in London and originally trained as a singer at Trinity College of Music. Operatic roles included Sellem in The Rake’s Progress, Don Basilio and Don Curzio in Le nozze di figaro and Sultan Soliman in Zaide. He has directed Orpheus in the Underworld (Offenbach) for Trinity Laban at Blackheath Halls and Trouble in Tahiti (Bernstein) and Susanna’s Secret (Wolf Ferrari) for the Little Opera Company. He works regularly with young singers and has directed opera scenes for the Royal Academy of Music, Trinity Laban Conservatoire of Music and Dance and the Guildhall School of Music and Drama. As an assistant director he has worked at Glyndebourne Festival/Glyndebourne On Tour, the Royal Opera House, English Touring Opera and Opera Holland Park with directors such as Richard Jones, Sir David McVicar, Laurent Pelly and Robert Carsen.  Next year he will assist Tom Cairns on Thomas Ades’  The Exterminating Angel and Keith Warner on Otello at the Royal Opera House.  He will also direct L’incoronazione di Poppea for Hampstead Garden Opera at Jacksons Lane Theatre, London.

Ele is a set and costume designer and a social engagement/workshop facilitator. She has designed sets, costumes and wigs for a variety of theatre and opera productions as well as installations and interactive exhibitions. Ele was awarded Best Costume Designer at the 2015 Off West End Awards for Usagi Yojimbo at Southwark Playhouse. The Blank Canvas (The King’s Head with Opera Up Close) won Best Opera Production at the same awards. As a facilitator she works with children, young people and people with special needs, using scripts, devising techniques and design-based activities. Ele’s other current work includes a community and social engagement project exploring the heritage of Campanology in Richmond, North Yorkshire; set and costume design for Theatre Centre’s schools touring production Layla’s Room; and design consultation for Curious Directive’s production in development Spindrift.

Caleb lives and works in the South East of the UK. He is a multi-disciplinary artist who uses sculpture, video, sound and light to create highly experiential installations and performances. He has presented artworks at various institutions including the Southbank Centre, the Roundhouse and Tate Modern. He studied sound recording at BA level and is currently completing an MA in Fine Art at the University of Brighton. Alongside his own art practice he collaborates and performs in the live AV duo Madden/Dylewski, is a founder member of sonic arts collective the Spirit of Gravity, and works as a production manager/curator/programmer at the De La Warr Pavilion in Bexhill-on-Sea.

Described as ‘musical’ (Opera Now) and ‘promising’ (The Times), baritone James Newby won the first prize at the 2016 Kathleen Ferrier Awards and was also awarded third prize and the Richard Tauber prize (for best interpretation of a Schubert Lied) at the Wigmore Hall/Kohn International Song Competition in 2015. This year he became the recipient of the Wigmore Hall/Independent Opera Voice Fellowship and is currently singing with the Glyndebourne Festival Chorus.

James enjoys a busy schedule as a recitalist. Recent performances include two recitals in the Perth International Arts Festival, Australia, including a recital of Schubert’s Die Schöne Müllerin and a performance of Schumann’s Dichterliebe in the Trinity Laban Schumann and Poulenc Project led by Eugene Asti.

James’s operatic roles include the title roles in Eugene Onegin (Brent Opera) and Don Giovanni (Moon Little Opera), Aeneas in Dido and Aeneas (Trinity Laban Chamber Choir), Gobrias in Belshazzar and Apollo in Orpheus in the Underworld (Trinity Laban Opera), Papageno in Die Zauberflöte (Suffolk Opera) and Guglielmo in Così fan tutte (Everybody’s Theatre Company). His latest performances include Vaughan Williams’s A Serenade to Music at the Last Night of the Proms and creating the role of Simon in Howard Moody’s opera PUSH.

James is currently in his final year of study at Trinity Laban Conservatoire of Music and Dance under the tutelage of Alison Wells. He continues his studies with a scholarship place on the Master’s course at the Guildhall School of Music and Drama with Robert Dean.

Matthew Stiff studied music at the University of Huddersfield where he received a BMus and MA in performance. He went on to the Guildhall School of Music and Drama where he took the Postgraduate Diploma in vocal training and then the Opera Studies course from which he graduated with distinction in 2011. He has received scholarships from the Worshipful Company of Goldsmiths, Maidment Scholarship administered by the Musicians Benevolent Fund and Wingate Scholarship Foundation. He studies with John Evans.

Engagements in the 2015-16 season include Leporello in Don Giovanni (for English Touring Opera), Snug in A Midsummer Night’s Dream (for Hyogo Performing Arts Center, Japan) and covering Sir Giorgio in I puritani and Judge Turpin in Sweeney Todd ( for Welsh National Opera).

Soprano Tereza Gevorgyan’s current and future engagements include Lauretta in Gianni Schicchi (for Opera North), Norina in Don Pasquale (for Glyndebourne Tour) and Diva Opera (for Gala City of London Sinfonia). She was a finalist in the prestigious Ferrier Competition in 2015, and was a member of the National Opera Studio in London in the 2014-15 season, supported by Opera North, the Amar-Frances and Foster-Jenkins Trust and Opera Les Azuriales.

Most recently she performed Musetta in La Bohème (for Nevill Holt Opera), La Fée in Cendrillon, Tatiana in Eugene Onegin, First Witch in Dido and Aeneas, Dalinda in Ariodante and Maria Bertram in Mansfield Park (for the Royal Academy of Music), The Bat/Animal in L’enfant et les sortilèges (for the Barbican Centre with BBC Symphony Orchestra), Serafina in Il campanello, Serpina in La serva padrona, Fanni in La cambiale di matrimonio (for National Opera Studio in Armenia and the Armenian opera), and Anoush (at the Tabernacle). Other studied and performed repertoire include Elvira in I puritani, Countess Adèle in Le comte Ory, Antonia in The Tales of Hoffmann and Miss Wingrave in Owen Wingrave.

Tereza recently performed concerts in Carnegie Hall and Chicago Symphony Hall, celebrating Georg Solti’s 100th birthday with the World Orchestra for Peace conducted by Valery Gergiev. She recorded an Italian song for Solti’s 100th birthday celebration CD, which was produced by Richard Bonynge. Additionally, she recently performed concerts in Florence and Naples Palace of Caserta, Bach’s Easter Oratorio at St Yeghishe Church, Brahms’ Requiem and Mendelssohn’s Hear My Prayer at the Church of St Mary the Virgin in London with the Stanmore Choral Society.

She is the winner of the Rosenblatt Recital Prize and the Edith Mary Clarke Cup for best female singer (April 2014), winner of the Pavarotti Prize (October 2013), the Les Azuriales Karaviotis Prize (August 2013), the Thelma King Singers’ Award (March 2013) and the Ludmilla Andrew Russian Song Prize (June 2011). In 2009 she was a finalist at the Belvedere Competition in Vienna. She was one of twelve young singers selected for the 2011 Georg Solti Academy in Tuscany, studying with Dame Kiri Te Kanawa and Sir Thomas Allen and singing concerts in Tuscany.