Jazz on a Summers Afternoon: Hexagonal 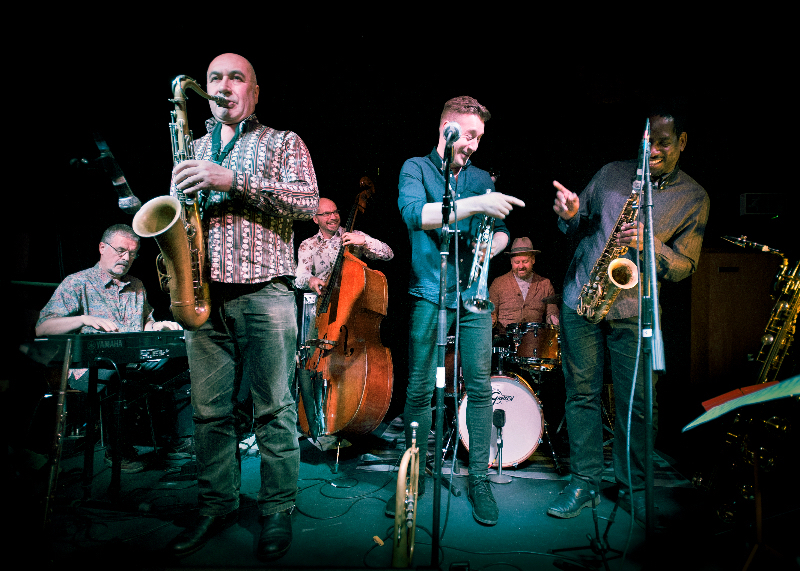 “The band is impressively hip…with a variety of rich melodies, vibrant harmonies and infectious grooves.” That’s how London Jazz News described Hexagonal, the high energy sextet who have emerged as a powerful presence on the UK jazz scene. In their relatively short life, they’ve already enjoyed huge acclaim at club and festival appearances and performed in concert for BBC Radio 3’s Jazz Now and in session for Radio 3’s J-Z.
Hexagonal initially came together to play the music of jazz giants Bheki Mseleku and McCoy Tyner. It was an ambition born of experience: bassist Simon Thorpe and pianist John Donaldson both toured extensively with Mseleku, while reeds player Jason Yarde had the “pleasure and pressure” of working with McCoy Tyner. This gives their playing an exciting authority and authenticity. Other members include saxophonist and composer Greg Heath, percussionist Tristan Banks and trumpeter Graeme Flowers. The band have now added some of their own compositions to their repertoire.
In spring 2019 Hexagonal played the ‘Love Supreme’ Festival at the Roundhouse and appear at the Bristol International Jazz and Blues Festival as part of Jazz South’s Arts Council funded new programme supporting selected new bands from the region. The band’s debut album McCoy and Mseleku has been hailed by fans and critics alike. They are now working on a new album to be released later this year.
All six band members are much in demand as instrumentalists in their own right and between them, the band have worked with everyone from Quincy Jones to Van Morrison. It’s something of a miracle when the six of them are in the same place at the same time, so opportunities to see them live are not to be missed.