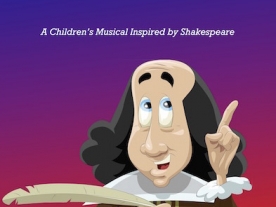 In 2015 Battle Festival’s commission, performed by school children from within 1066 Country took inspiration from Shakespeare’s Songs and poems.

Ian McMillan (Bard of Barnsley and regular Radio 3 and 4 contributor) and composer Tony Biggin were challenged to reinterpret Shakespeare’s classic 7 Ages of Man speech for a contemporary audience. Their response was a typically insightful and witty version that was performed in two concerts by pupils from local primary schools supported by a quintet of professional musicians. Adding to the festivity was performances by percussion and recorder ensembles from Hastings and Rother Music Centre. Narrated and compered by actor Bill Fellows.

Tony Biggin has written numerous youth music-theatre pieces. Concern for peace and justice led to a long-term collaboration with writer, Alec Davison and a string of tuneful and dramatic works ensued, including two secular oratorios, The Gates of Greenham and Cry of the Earth.