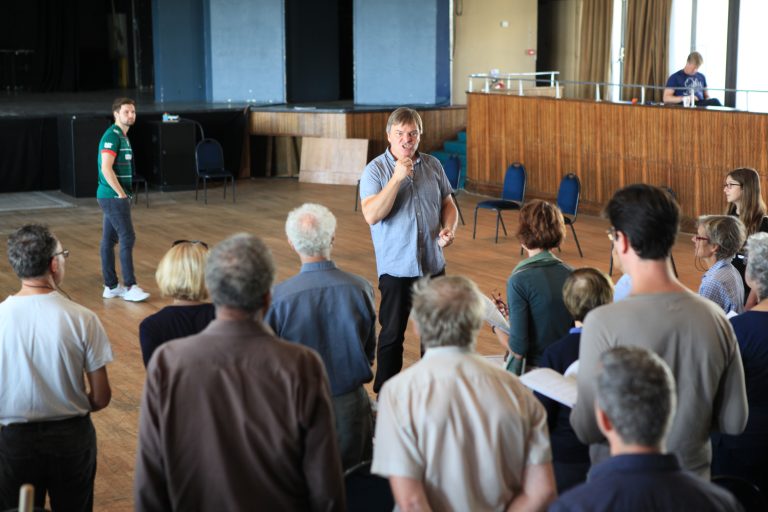 What is it that triggers somebody’s need to start piecing together fragments of memory that are so painful? What drives you to face questions from your history that have been  necessary to suppress in order to live your life? What parts of our history lead us to seek redemption? These are the questions we have asked when exploring the character of a man called Simon. From early childhood to his later life, this man is on a journey that will see the worst and the best of humanity, and that ultimately ends in forgiveness.

This extraordinary story has been presented in a new work that puts our ‘community’ at the heart of Simon’s journey. Throughout history, our stories have been told aurally, passed on from generation to generation, and this production seeks to explore the repeated, all too familiar mistakes of mankind – from 1066 and the Norman invasion, through to today, spanning different eras and cultures. The story unfolds as Simon pieces together his history. Through his eyes, we gradually see him coming to terms with the past, allowing him to move towards a place of forgiveness.

There is no perfect ‘theatre’ for any one piece, but upon visiting the De La Warr Pavilion for the first time, I was fortunate enough to find a space that is dynamic and full of possibilities. Initially in our design, there was no aesthetic distinction between audience and performers. They merge. The characters in this story could be any of us, at any time in history. By surrounding the performance space with the audience, we are able to tell our story to the maximum amount of people from every angle.

Howard has written a piece that allows all our performers and audience to engage on a personal level. It is both accessible and dramatically challenging. The structure of the piece needed to be digestible for all ages, both thematically and musically. The result is a powerful and emotive piece of music, brought to life by a hugely energetic and talented group of performers.

For me, there have been two processes running in parallel to create this performance. The first is working with three fantastic young soloists. Their interpretive skills and sense of play has been refreshing and necessary when tackling a story as intense as this one.  Perhaps even more moving and exciting for me has been the process of engaging with the community choirs, singing groups and local children, some of whom have never sung or performed in this way. They have illuminated and breathed life into the heart of this story.

How could we engage with the community who are making this piece with us, and how can my design process be inclusive? On most projects, although I am collaborating with people, I mostly work in isolation to research and develop designs, bringing ideas back for discussion. For PUSH, the foundation of my process was opened up to others and I needed to structure my work to allow others’ ideas to flesh out my own, informing and inspiring both my design process and decisions.

The opera leads us to think about the cyclical nature of war and suffering, reflected in the lines that the chorus sing: ‘History repeats over thousands of years’ and ‘Mirrors of the past’. So I wanted to keep the starting inspiration wide, to be inspired by many periods and cultures rather than focusing on only those directly associated with the narrative. I researched the current and historical social/political contexts, identifying ten specific periods and cultures between 1066 and 2016 to research further.

Research is one of the most liberating parts of the design process for me, and there was a lot to explore. Nine A-level textile students at Rye Studio School joined me in my design process, taking on one research period each. It was interesting for me to guide others in finding the type of research I wanted to be working from, yet allow them to also express themselves in their work, and in turn allow their approaches to influence me. The students collated all their research into five distinct mood boards of aesthetic, style, pattern, colour and texture (gathered regardless of period and culture) and these became one of the essential backbones of the designs.

Period research is always adapted somehow to fit the world of a production. One of the most exciting and challenging aspects of this project was how to be infused with such a huge range of rich period research, yet remain contemporary in the final design of the costumes. We wanted the opera to be as much about today as the past, and the chorus is a huge part of that.

Members of the chorus wear their own ‘normal clothes’ so that at the start of the opera, theatricality is reduced providing less opportunity for the audience to view the story as happening to ‘someone else’, ‘somewhere else’. The extra garment the chorus members wear categorises and strips them of their personal identity. The design for this garment went through many variations and drafts before reaching the final design.

The historical research was vital to provide a background and structure for the choices I made, yet it was important to remain contemporary in the final design. Specific influences include: tunic shapes of Anglo-Saxon clothing (researched by Ametx); material with slight stiffness, inspired by historical Korean clothing (researched by Chloe); the semi transparent look of the fabric (inspired by Poppy and India’s mood board). The biggest influence came from Brooke’s research on the Tasmanian Aboriginals and the Native Americans. Her research highlighted people using what was available, practical and natural for them, and the rawness of the clothing. This encouraged me to find what I felt the guard characters would have used – the easiest way to minimally dress, categorise, and culturally suppress these chorus characters – meaning that they should not be over-designed or too theatrical. With so many people onstage too, simplicity was key. The colours and symbols of the spray paint markings on the lab coats are specifically designed from the five aesthetic mood boards the Rye students created.

The sister’s costume bridges the two clearest periods in the narrative. It takes inspiration from girls’ dresses and women’s work overalls during the Second World War (thanks to the research of Emilie from Rye) as well as contemporary styles of teenage girls today. The colours of the dress reference all the colours of the chorus’s spray-paint markings.

Hoodies, jackets, backpacks lined with hi-vis link in colour and material to the guards’ uniforms, but have a different type of uniformity. Inspiration came from medieval armour, 1970s gangs in the Bronx, civilian militia groups and the self-decorated helmets of American Vietnam War soldiers.